The Fine Line Between Beer and Wine 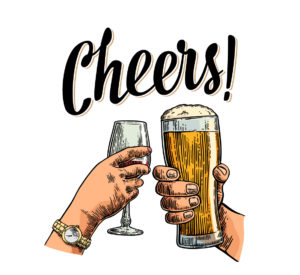 Have Beer and Wine gotten too close for comfort?

With wine, it’s often all about age.  With beer, freshness gives brewers bragging rights.  But not so fast!  These days, craft beer makers are watching winemakers very carefully.  In the world of wine, the term barrel-aged is downright magical… Wines that are barrel-aged definitely cost more money and takes more time to produce, and in recent years, more and more brewers have found a lot to love by studying winemaking success.

Fine wine, particularly reds, can improve appreciably with barrel aging.  Not only does the process impart some unique flavors, but it also adds a measure of complexity to the final product.  Today, aging beer in whiskey and wine barrels is has become immensely popular, but the relationship between beer and wine gets tighter and tighter every day, and in some very unusual ways.

On this episode of The Wine is Talking  Host David Wilson and his guests will look well beyond barrel aging and share with you why the beer and wine relationship has become so significant.  Just how tight is that kinship?  Well, consider this; The latest movement afoot in the wine and beer realm is the creation of hybrids… yes, beer/wine hybrids.

Joining David in the conversation is the producer of a documentary who visited 80 breweries in 30 days.    He’s Jeff Smith, a fellow who offers a ton of insight into the craft beer tsunami, but also the unlikely kinship between beer and wine.

Kicking off the conversation is renowned “Sommelier to the Stars” Christopher Sawyer, who David turns to for the answer to the question, “Has the relationship between beer and wine gone too far? You’ll soon hear the answer on Episode 11 of The Wine is Talking!